5 Reasons Why You Need an LED Flashlight

You are here: Home1 / Blog2 / Flashlights3 / 5 Reasons Why You Need an LED Flashlight

5 Reasons Why You Need an LED Flashlight

If you are still using an outdated flashlight then you are missing out on the brightness and features packed into a bright LED flashlight. Discover the 5 reasons why you need an LED flashlight as there has been a great deal of progress made in flashlight technology. These not only include a dramatic increase in brightness but, also other useful features such as a zoom focus function and multiple light modes. The flashlights we are going to talk about today are referred to as “tactical military led flashlights”. The reason behind this name is the fact they most of the models that are currently popular were originally made for military use only and now they are available to the public.

1. Longer Bulb Life
LED lights themselves offer greater efficiency than other flashlights that are powered by incandescent bulbs. Typically an incandescent bulb offers an average of six hours of continual use while an LED flashlight bulb can offer as much as 50,000 average hours of continual use. If you often use flashlights for nighttime activities, such as camping or hunting, you will discover an LED flashlight offers a much longer bulb life with lower power consumption. As an example, an incandescent bulb delivers about 9 lumens per watt as compared to an LED which produces about 100 lumens per watt.

4. Variety of Types and Purposes
LED flashlights are versatile, which means they can be used for many different purposes. They also come in a variety of form factors, from bulky and durable to slim and small. Some offer multiple features so they can be used in various different situations such as self-defense, camping, hunting and general household use. Some of the mini LED flashlights are ideal for walking the dog and used in situations where a lower amount of light intensity is not required.

5. Durability
LED flashlight bulbs have sturdier construction than other types of delicate flashlight bulbs. They have a plastic housing that can withstand the impact of drops, vibrations, and even wide temperature variations. An incandescent bulb is made of glass and requires fine filaments while an LED bulb is a solid state device. It has an LED chip placed securely inside the plastic housing, which makes it the ideal bulb for a portable utility tool like a flashlight.

Because it is Ultra Bright
The TK120 Flashlight technology works in a much different way than other flashlights as it uses an LED chip instead of led diodes. This technology offers extended battery life and the light is nearly 40 times more powerful than the regular flashlights that bulbs or diodes.

Because it is Affordable
Most flashlights cost above $100 while the TK120 retail price is much lower. When comparing the TK120 to other flashlights you should notice some differences. The TK120 is very durable and constructed of a more light-weight aluminum alloy. The TK120 also offers a memory light mode feature and is water resistant. Now with all of these features, the TK120 Flashlight is still almost 40% less expensive than comparable flashlights. 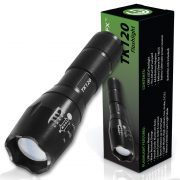 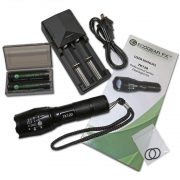