What Is an IMR Battery?

Advances in battery technology have meant that consumers now have access to a wide array of batteries that offer greater capacities and longevity than ever before. One of the most popular types of batteries are IMR batteries.

If you’re new to IMR batteries, you might not fully understand why they exist and how they get best suited to specific applications. The following explains more on the subject and why you might want to consider buying IMR batteries for your needs:

What Is an IMR Battery?

Are you wondering what is an IMR battery, the short answer is that it’s a rechargeable lithium-ion manganese battery in a round format, hence the acronym (I = ion, M = manganese, R = round, and rechargeable).

IMR batteries are available in several different formats or types, but the most common is the 18650 flat top battery, which resembles an AA battery.

As you might have guessed, it has a slightly different chemical composition to standard lithium-ion batteries; IMR batteries use manganese oxide, whereas conventional lithium-ion ones contain cobalt oxide.

Why Use IMR Batteries Over Alternative Types? 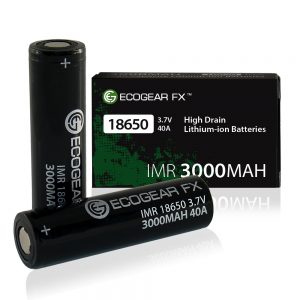 There are several reasons why you would consider using IMR batteries over other types.

Secondly, you would consider rechargeable IMR batteries because they have a low internal resistance compared with other types. Low resistance in a battery is essential as that means it can supply higher current.

Lastly, IMR batteries typically have half the capacity of conventional alternatives. Why is that a good thing, you might wonder? The reason is simple: they are quicker to recharge. IMR batteries have lower capacities due to the manganese used in their chemical composition.

IMR batteries, such as the rechargeable 18650 flat top battery sold at EcoGear FX, are perfect for devices that require high-drain batteries.

Which Devices Most Commonly Use IMR Batteries?

Some people wrongly assume they can replace all types of batteries they use in their devices with IMR ones. The truth is, IMR batteries like the 18650 flat top battery must only get used for high-drain applications.

The following are examples of high-drain devices where IMR batteries should get used instead of conventional alternatives:

It’s no secret that consumers have access to a vast selection of video doorbell products. Video doorbells offer homeowners an extra layer of security as they can see who’s at their door before opening their doors.

Many video doorbells are battery-operated products and use the IMR 18650 flat top battery. Such batteries are ideal for video doorbells that offer HD-quality footage and motion detection, two examples where a strong power source is a must.

Several video doorbell products allow householders to replace batteries with ease. That means people can theoretically keep a selection of charged IMR batteries ready to swap with discharged ones in their video doorbells with minimal disruption.

Some people might wonder why an LED flashlight would need a lot of current and voltage, given that LEDs inherently consume minimal power. That is the case for small pocket-sized LED torches at the budget end of the market; ones that only contain a few LEDs.

However, some flashlights contain an extensive array of LEDs to emit a powerful beam of light; one that could easily get spotted a vast distance away. They have a significantly increased demand for power, which cannot be satisfied with ordinary alkaline batteries.

For such applications, it makes perfect sense to use IMR batteries for two reasons. Firstly, an IMR battery such as the 18650 flat top battery can provide the power necessary for an LED flashlight to project an intense beam of light.

Vaping products like vaporizer pens are battery-powered devices. Whenever inhalation gets detected, a vaporizer heating element heats the e-liquid in a cartridge or reservoir. The user then inhales that vaporized liquid.

As you can imagine, vaporizers need a lot of power for the heating element to work on-demand. The only way it can do that is through a compact power source that outputs high voltage.

IMR batteries like the 18650 flat top battery are ideal for vaporizers as they don’t take up much space and provide the power necessary to vaporize e-liquids. Most vape pen users can easily recharge IMR batteries by connecting their devices to a USB power source.

Are IMR Batteries Safe to Use?

When you read the specifications of IMR batteries, one thing you’ll notice is that most of them don’t have built-in protection circuits like regular batteries. That’s because they have low resistance, making them inherently safe.

They are safe because the battery resistance doesn’t increase as it gets discharged, which is often the case with alternative battery types. It’s worth noting that some battery manufacturers do produce IMR batteries with protection circuits if you have such a need.

Applications that exclusively use IMR batteries typically have protection circuits built into them and stop recharging once they detect a specific battery voltage.

There’s no denying that IMR batteries, such as the 18650 flat top battery type, play an essential role for high-draw devices. They might not have the capacities of regular lithium-ion batteries, but they excel in voltage output.

That fact alone makes them perfect for providing high levels of power on demand. Before buying IMR batteries, always check that your device uses them and not standard 18650 or AA batteries.

What Are Resistance Bands Good For?